With Benfica and Sporting both said to be interested in the signing of Francisco Trincão, we can expect the Portuguese media to have many more stories on this chase until the summer.

The 22-year-old, who’s loaned by Barcelona to Wolverhampton Wanderers until the end of the season, could be back to the Camp Nou in a few months, and that’s when the Lisbon sides want a chance of signing him.

We get to see two Portuguese newspapers talking about his situation today. One of them is O Jogo, who are more focused on Sporting’s interest.

The outlet points out the midfielder is an ‘old and difficult dream’, as the Lions already tried to sign him from Barcelona last year.

The problem now is that if Wolves choose not to keep the player, then the Catalan side’s priority is to get him sold on a permanent deal. That’s something Sporting can’t afford, as their hope was of signing him on loan. 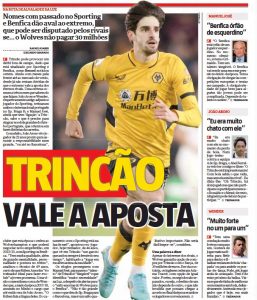 Meanwhile, Record confirms that Benfica’s and Sporting’s intention would be to sign Trincão on a loan deal, and that would only happen in case Wolves don’t keep him at the end of the season.

The newspaper takes quotes from people who worked with the player during his time in Portugal, and one of the most interesting statements comes from Manuel José, claiming that moving from the Molineux to the Estádio da Luz wouldn’t be easy.

The official highlighted what would be a “huge leap from Wolves to Benfica”.

“It’s not as big as the one from Braga to Barcelona, but it is an important qualitative leap. It would not be easy to impose.”