On July 24th, AS reported Wolverhampton Wanderers striker Rafa Mir has ‘many suitors’ and Wolves want an auction for him in this window.

Four days later, we covered claims from Marca explaining the English side received ‘many offers’ for the striker.

However, neither of these two reports have given a rough figure of the number of clubs interested in the 23-year-old.

Mundo Deportivo now state the Wolves owned player has received about ‘thirty offers’ to change clubs this summer. Despite having the opportunity to pick from one of these sides, the Spaniard has ‘decided to continue’ at SD Huesca.

After struggling during his loan spell at Nottingham Forest in the first half of the 2019/20 season, Nuno Espírito Santo’s side allowed the frontman to join Huesca on loan in January. 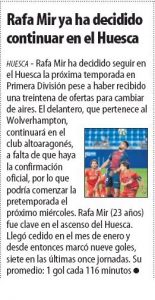 Mir’s nine goals and an assist in the second half of the season helped the club win the Segunda División, and in the process, achieve promotion to La Liga.

It’s claimed the attacker ‘will continue’ at Huesca, ‘pending official confirmation’, so that he could part of the club’s preseason preparation from next Wednesday.