Rafa Mir is under contract with Wolverhampton Wanderers, but that is soon to change, according to Saturday’s edition of Marca.

After identifying the striker as the ‘main candidate’, Atlético Madrid are ‘very close’ to closing the deal for the Wolves owned player.

The 24-year-old’s form and scoring record, while on loan at SD Huesca last season, convinced several La Liga sides to make an approach for him this summer.

However, the Spanish champions have overtaken Sevilla and other suitors to acquire his services.

It’s claimed the operation to take the frontman to the Wanda Metropolitano ‘should be sealed in the next few hours’, once the final details of the transfers are closed. 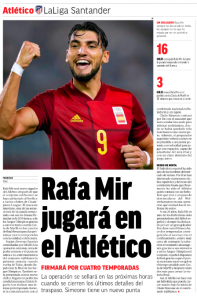 According to Marca, the player will sign a four-year contract with Diego Simeone’s side and is expected to join training next week, when he returns from the Tokyo Olympic Games.

Mir is representing Spain, who will take on Brazil for the Gold’s medal on Saturday.

With Marca stating that Mir is set to start training with Atlético next week, it looks like the player will not go on a vacation after today’s clash.