Wolverhampton Wanderers midfielder Bruno Jordão should leave the club on a loan deal, according to reports from Portugal today.

Newspaper Record says the 21-year-old ‘very close’ on completing a move to Liga NOS side Famalicão.

Despite sounding pretty sure about the transfer, the outlet doesn’t seem to have many details on how long the spell should take.

They highlight the fact that Famalicão are focused on using youngsters in their first team this season, and that means Jordão should get enough playing time there. 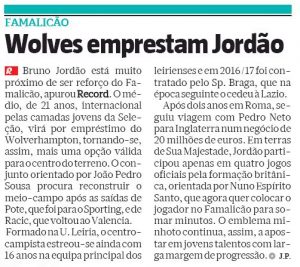 The player got one appearance in the Premier League and one in the Europa League, having only played a few minutes in each.

It was in the EFL Cup that he had a bigger chance to prove himself against Reading and Aston Villa, but apparently that wasn’t enough to convince the manager he deserves a place in the first team squad.