Duckens Nazon had a brief spell in France with Roye-Noyon, Olympique Saint-Quentin, Laval and Indian Super League side Kerala Blasters before joining Wolverhampton Wanderers in January 2017.

Last summer, the French-born Haitian international signed a new contract with the English club that kept him at Wolves until 2019.

He was not included in Nuno Espírito Santo’s plans at Molineux Stadium and thus, was allowed to go out on loan.

The striker had two loan spells at Coventry City and Oldham Athletic in the last campaign, and it looks like he won’t be included in Nuno Espírito Santo’s squad next season either. 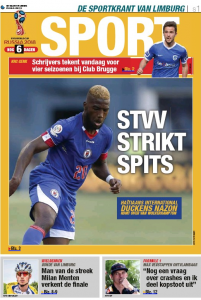 Nazon has one year left on his deal and if reports from the Belgian newspaper Het Belang van Limburg are to be believed, he’s set to leave the newly promoted Premier League side this summer.

The 24-year-old is expected to become Belgium club Sint-Truidense VV’s (STVV) first signing of the summer. The report claims the striker has already agreed a three-year deal with the Jupiler Pro League outfit.