Home Championship Wolves have only paid for around 1/3 of Ruben Neves, rest may...
SHARE

Signed on a club record fee this summer, Ruben Neves arrived at Wolverhampton Wanderers with great expectations, and has been living up to the hype after quickly conquering a spot in midfield.

The player was signed in a £16.1m move from Porto, stealing the record of his compatriot Helder Costa, who arrived from Benfica one year earlier for £13.5m.

But the major part of Ruben Neves’ deal is still to be paid, as revealed by Porto’s annual financial report this weekend. 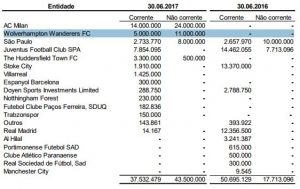 There are no details on when the Championship side will be deposit this other part, or if it will be divided in several payments.

Clubs often pay for transfers in different stallments, especially in the cases of big fees. But considering that Neves is a club record move, and a uncommon amount for a Championship side, it shows that the Wolves have part of their future resources already commited to this player.

With a Premier League promotion certainly making a big difference in the club’s accounts, maybe that’s what they are expecting to pay for the rest.