On Wednesday, Record had a curious story about Benfica youngster João Carvalho being sold in England.

The newspaper claimed club president Luís Filipe Vieira had travelled to the country, alongside Jorge Mendes’ ‘right arm’ Hugo Valdir, to negotiate the sale of the player.

As the outlet didn’t have a clue about who would sign Carvalho, we made a guess when covering the story, and said that Wolves were the most likely destination for him.

And well, there are some interesting updates from Record today. 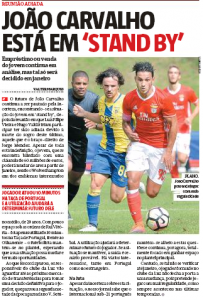 First thing is, the meeting didn’t happen. The newspaper claims that Hugo Valdir’s father-in-law has passed away, so the business was put to one side.

Now there’s only one club who are mentioned as a potential destination in the story, and guess who? Yes, Wolves are described as ‘one of the most interested clubs’.

It’s hard to know if this is new information or if Record just read what we wrote yesterday, but in any case, it shows that Wolves’ interest is something which makes sense.

Wolves signing several players from Portugal, those players doing well, working closely with Mendes, and having Nuno Espirito Santo as manager are all big ticks.

Anyway, it’s still strange how their speech has changed in today’s update. Although on Wednesday they claimed the player was ready to be sold, he’s now said to be on ‘stand by’.

It means he is expected to have a few more chances at the Lisbon club, and in case he doesn’t take them, then he will indeed be sold in the January market.

Although the price for him is still unknown, it’s certainly going to be much less than his €60m release clause.