It is perhaps now no exaggeration to say Moussa Marega has been linked to half the Premier League.

Over the past year there’s been countless links between the FC Porto player and a move to England, and on Wednesday the story was pushed again.

Portuguese newspaper O Jogo linked Tottenham, Chelsea, Everton and West Ham. Once again it was explained Porto want to keep the striker and he can only leave if a club matches the €40m buyout clause in his contract.

On Thursday, Record have their own snippet, but with two other clubs.

This time it’s Newcastle United and Wolves getting the mention, with the Portuguese newspaper saying the pair are following Marega.

Unsurprisingly, it’s again stated Porto don’t want to sell, and Marega’s €40m clause would have to be reached if Wolves or Newcastle want to do a deal. 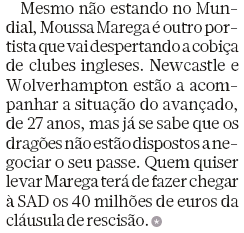 There doesn’t seem to have been any concrete approaches at this stage, and yet the rumour continues to be pushed, with different clubs for different reports.

Perhaps Porto wouldn’t mind selling Marega for that €40m and want to get the idea out there.