At the weekend, we covered the Portuguese media claiming Wolverhampton Wanderers are interested in signing André Almeida from Vitória Guimarães.

With the midfielder valued at ‘between €4m and €6m’, he showed up as a cheap option for Wolves, who’d still need to battle FC Porto for the signing.

Now on Monday, it’s newspaper A Bola who writes about the Dragons’ hunt for Almeida, claiming they’re positioned to try to sign him ‘at the right time’.

The outlet then points out that a couple of English clubs are interested in the player. Even though they don’t name Wolves, they do give a few signs that the Molineux side could be among them. 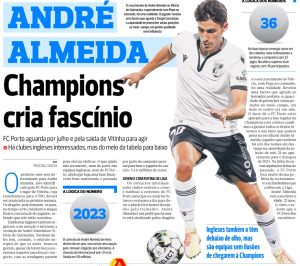 A Bola writes that even though those English clubs have more economic power than Porto, they can’t offer Almeida a big argument for a move, which is the Champions League.

It’s said the interested Premier League sides belong to the lower part of the table, and competing in the European competition has become a ‘fascination’ for the player.

That’s a big advantage the Dragons have, so if Wolves want to convince the midfielder of making the move, they need to offer him a big salary and assure him the club will have better results in the coming seasons.

According to A Bola, none of the clubs made real offers so far, and Porto intend to put between €5m and €6m on the table.