Wolverhampton Wanderers look set to miss out on a deal for Sporting midfielder Matheus Nunes, with the Portuguese side confident of keeping him this summer.

That’s according to A Bola, who say both the player and his club believe he will be staying where he is for the time being.

Although nothing can be guaranteed in the transfer market, that market has ‘not yet attacked’ Nunes as some were expecting.

There’s a belief at Sporting that won’t happen either despite the apparent interest of Wolves, which has been made clear over the last few weeks.

They had been looking at deals for both Joao Palhinha and Nunes, even putting the latter above his teammate, but have only ever made a ‘plan of intentions’ and nothing concrete.

Their plan was to present a €45m plus €5m in objectives bid, but that offer would only arrive if they sold Ruben Neves.

His departure would open up a hole in Wolves’ midfield that they planned to fill with Nunes, but the Portuguese midfielder is yet to depart Molineux and may not do so at any point. 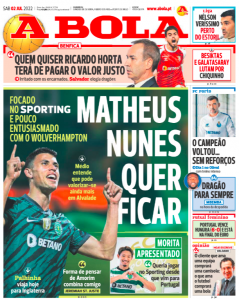 In the meantime, the sales of Palhinha and Nuno Mendes, alongside other incomings, means those in charge of Sporting now have the financial strength to resist any bids for Nunes.

Wolves would have had to work to convince the midfielder anyway, as Nunes was not convinced by the switch, preferring to join a club competing for titles or in the Champions League, preferably both.

For him, it was either that or a club which could offer him a significant improvement on his current wage packet.

As that’s not on offer, he believes it would be wise to stay with Sporting and continue to increase his value, playing regularly and performing, particularly with a World Cup around the corner.

Thus, he remains firmly focused on his current side for the time being, with a move to Wolves seemingly not in the offing.