There’s a claim in the French media that Caen are interested in Wolverhampton Wanderers midfielder Prince Oniangue.

The 29 year old spent the second half of last season on loan at Angers and he could be set for a return to France in this transfer window.

Ouest France today report Oniangue is a target for Caen as they look to strengthen their squad this summer. Several players have been linked with the Normandy club and it’s hoped a deal can be sealed for the Wolves player before they return for preseason training next Thursday.

Gilles Sergent, the French club’s president, is said to have confirmed the transfer plan on Friday.

It’s likely the player will need to leave Wolves this summer after failing to hold down a regular place in the team, making just ten league appearances for the Premier League club. 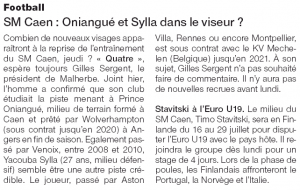 Since arriving in 2016 the Frenchman has had loan spells with Bastia and more recently Angers, with a return to his home country is again on the cards.

Oniangue is contracted to Wolves until June 2020.