Here’s one more Porto player who Wolverhampton Wanderers are reportedly interested in signing this summer.

According to reports from Portugal today, the Premier League side are now chasing the Dragons’ midfielder Jesus Corona.

There are two newspapers who bring this information. The first one is Correio da Manhã, who says the Mexican player ‘could’ join the Molineux side.

They make it clear that Porto will only let him go for €30m, and say the Portuguese club are counting on the help of Jorge Mendes so Wolves can get to that amount. 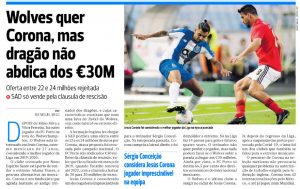 Newspaper A Bola is another one reporting Wolves interest, and they claim that the English club have already made a bid for Corona.

It’s said Nuno Espírito Santo’s side offered between €22m and €24m for the player. But that was turned down by Porto, who continue to demand €30m, which is the figure of his release clause.

Corona is considered to be a very important player for the Dragons, and as they only have 66.5% of his economic rights, they’ll do their best to get the maximum from the sale.