Portuguese newspaper A Bola today features a big piece on the future of Francisco Trincão, who is now said to be a target for Sporting this summer.

The outlet writes that the winger has become a ‘priority’ for manager Ruben Amorim, who previously worked with him at Braga, and the Lions should try to sign him on a loan deal.

Trincão belongs to Barcelona and is currently having a spell at Wolverhampton Wanderers, and all of Sporting’s plans would collapse in case the Molineux side trigger their €30m buying option over him.

However, according to A Bola’s information, that is not happening.

The newspaper have learned that Wolves already told Barça they are not buying the player, therefore he’s returning to Spain at the end of the season. 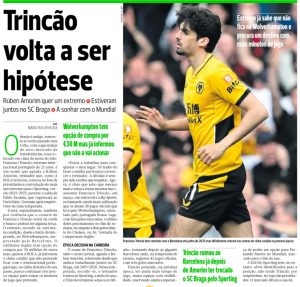 Since arriving at Wolves, Trincão has only managed three goals and one assist in 28 appearances.

A Bola writes the winger’s intention is to ‘have even more game time, in a club with visibility’, as he hopes he can find a place in the national team in the World Cup.

This means Sporting could end up being an option if he leaves Wolves and returns to Barcelona, which appears to be the case.