On Friday, we covered claims from Portugal of Wolves interest in João Palhinha. Not to be confused with Braga’s Paulinho, who Wolves are also being linked to, Palhinha is a midfielder who spent the season on loan at Braga from Sporting.

The Lisbon club don’t see a future for him with them and therefore a sale is being planned for this summer. Record report there are interested clubs in both Spain and France, but Palhinha prefers a move to English football.

Wolves are named as the ‘likely destination’ for the 25 year old, and whilst Sporting are hoping for €15m there’s a suggestion they may not be able to reach such a level.

Given that Palhinha hasn’t been able to breakthrough at Sporting, who haven’t been good for a while, and has been loaned out to both Belenenses and Braga in recent years, it’s doubtful whether he’d be able to make an impact at Wolves. 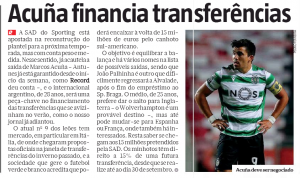 This could be a scenario which has seen the player’s agents and Sporting look for options, and land on Wolves given their recruitment from Portugal in recent years.