The outlet claims there could be a big sequence of chances which would lead to this move. First, Maurizio Sarri could be leaving Chelsea to join Juventus, as widely reported this week.

Then the Blues’ priorities for his place would be two Portuguese managers: Paulo Fonseca and Nuno Espírito Santo.

Finally, to replace their own boss, Wolves would like to have Lage. Although Correio da Manhã doesn’t claim the story to be an exclusive, they say they’ve learned Wolves would have no problem in paying his €20m release clause at Benfica. 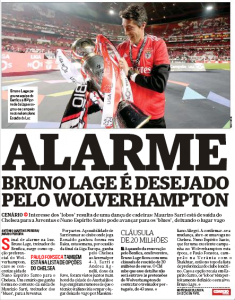 Bruno Lage has some experience in British football, since he was Carlos Carvalhal’s assistant at Sheffield Wednesday and Swansea City.

After managing Benfica B at the start of the season, he took charge of the first team in January, with the sacking of Rui Vitória. Since then, he’s had an incredible campaign and managed to win the Portuguese league this month.