Another week, another Portuguese player linked to Wolves. This time, we’re going with goalkeeper José Sá from Porto.

Newspaper A Bola today claims that the 25-year-old is a possibility for the Premier League side next season, especially because his stay at the Estádio do Dragão is unlikely.

José Sá lived through ups and downs last season, but really ended it on a low. He’s lost his place as a starter, and with Iker Casillas signing a new deal at the club, things won’t be changing anytime soon.

That’s why it’s good news for Wolves, who would have Sá under their gaze. A Bola says the club have been looking for a goalkeeper, and he could be a good option. 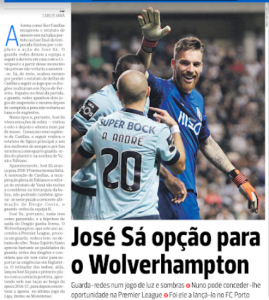 It was Nuno Espírito Santo who promoted Sá to Porto’s first team, and the manager continues to like the goalkeeper. A Bola doesn’t bring any information saying when a bid would be made or how much the player would cost. They just report the interest.

It’s worth remembering that Wolves have already been linked to another goalkeeper from the Portuguese league this season, which was Rui Patrício. Unfortunately the Sporting captain is more likely to join Napoli this summer.