Patrick Cutrone to Wolverhampton Wanderers continues to rumble on in Italy, and with André Silva’s transfer to Monaco seemingly crumbling down, it remains Milan’s big hope of making the money needed to buy Angel Correa.

However, as has been explained a couple of times already, the young forward isn’t all that keen to move to Molineux, with the latest excuse being that they aren’t a club of the highest level.

Corriere dello Sport continue with that train of thought on Thursday, reporting it ‘isn’t simple to convince’ the 21-year-old that a transfer to Wolves would be good for him.

Nuno Espirito Santo’s side, down their end, have put money on the table, €18m + bonuses to be more precise, but that isn’t seen as sufficient. 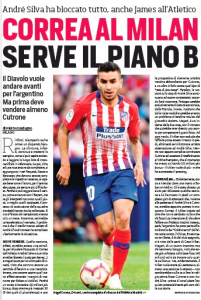 Milan are said to want more for their young prodigy, and Wolves could give them that, as they are claimed to have ‘increased their pressing’ to buy Cutrone.

With two weeks left until the Premier League transfer window shuts, there’s plenty of time to get this one over the line, but someone, somewhere, will need to be convincing.