With a contract expiring in 2022, Wolverhampton Wanderers are likely to cash in from Rafa Mir’s sale in the coming days.

On Wednesday, reports from Spain stated Atlético Madrid, Sevilla and Valencia want to sign the striker.

Gonçalo Guedes has been on Wolves’ agenda and they could offer Mir plus money to Valencia in exchange for the winger, reports Mundo Deportivo.

It’s claimed Wolves ‘could travel to Spain’ to negotiate the Portugal international’s transfer and include Mir as part of the deal. 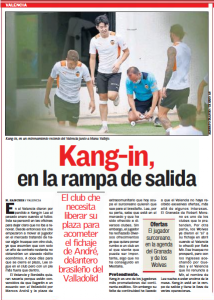 Valencia want between €30m and €35m to let their player leave, but Bruno Lage’s side find these demands to be high.

Apart from Guedes, the Premier League side also have his teammate, Kang-in Lee, on their agenda.

He has decided not to renew his contract that’s expiring in 2022 and AS say the South Korean has ‘one foot more outside than inside’.

The report states Wolves said ‘yes’ to signing Lee in April, when Valencia offered him in return for Mir.

This operation didn’t go through, but with the English club chasing Guedes and Valencia trying to sign Mir, AS explain Lee’s name could be back on the table again.