The Portuguese press doesn’t bring any reports on new incidents involving Wolverhampton Wanderers fans during their visit to the north of the country.

What they do report today is that a Wolves supporter was arrested following events which took place on Wednesday.

As reported by Record, the local police detained a fan from the English club and identified 16 Belgians who were involved in fights.

A statement has claimed that these supporters have participated ‘in strife and damage’, being spotted with the help of English and Belgian police, and the legal responses will now begin. 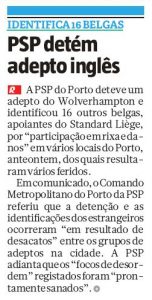 The Portuguese police also highlights that despite the events of Wednesday, authorities regained control and there was no further trouble.

The incidents took place in Porto, where some Wolves fans were staying ahead of their match against Braga, and Standard Liege supporters were also in the city for their game against Vitória Guimarães..

With last night’s draw, both Braga and Wolves have guaranteed their qualification for the competition’s knock-out stage.