Transfer rumours are slowly returning to the Portuguese pages, and today we see Sporting midfielder João Palhinha being linked with a move to the Premier League once again.

It’s newspaper A Bola who brings a story saying there are ‘echoes’ from England regarding interest in the 25-year-old.

The outlet doesn’t make it clear which clubs would move for the player in the January market, but they do name a club who’d been following him in the summer, and that’s Wolverhampton Wanderers.

They say despite being interested, Wolves never made a concrete move for Palhinha, who was available for only €15m at that stage. 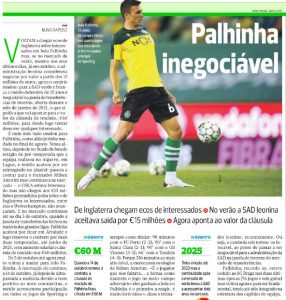 Things changed a lot in the past couple of months, with the midfielder signing a new contract. That’s why Sporting consider him to be ‘non negotiable’ in the January window, and will demand the €60m from his release clause to let him go now.

Palhinha was also linked to Leeds United over the summer, but it was Wolves who the Portuguese media expected to bid for him.