It turns out that the outlet had another bit talking about the competition for the 18-year-old, and there seems to be only one Premier League club in the race.

Record writes that Wolverhampton Wanderers are the side ‘dedicating most attention’ to Camacho’s situation, and their interest is more understandable since they have Portuguese manager Nuno Espirito Santo in charge.

Meanwhile, there’s also some interest coming from Germany, where Borussia Dortmund and RB Leipzig have already ‘positioned themselves’ in the battle for the winger. 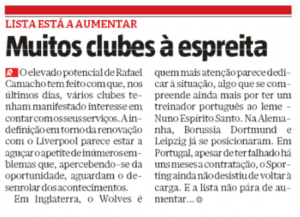 And besides Benfica, there’s another Lisbon side wanting to sign Camacho, which is Sporting, who already tried to sign him in January.

Record also writes that the list ‘continues to grow’, so it sounds like the race for Rafael Camacho will be a big thing in the summer.

Wolves have been warned.