The Portuguese sports newspapers don’t really mind having old news in their pages. When there isn’t time for evening news to go out in the morning edition, they often wait for the next day with no big problems.

That’s why Record has an entire page for the Manchester Derby today, talking about Manchester City’s fantastic start in the league and even the dressing room fight between players and manager José Mourinho.

But there’s still something new to read, because the newspaper invited a Wolves coach to comment Pep Guardiola’s side.

Record called Rui Barbosa, who currently works at Wolves, under Nuno Espirito Santo, as a goalkeeping coach, to talk about Ederson and other factors which have been keeping City top of the league. 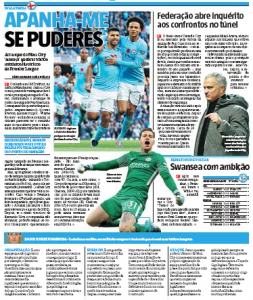 “He is a very strong goalkeeper at all times in the game,” said Barbosa, who had been Ederson’s coach at Rio Ave.

“He’s brave and safe for crosses, that is, in the outside game he has a physical structure that allows him to be a guardian of attack, so he closes all the angles of the goal very well and makes the task of opponents very difficult.

“Afterwards, he manages to be even more important to the team, as he adapts very well to the philosophy of possession that Man City adopt. He has a technical quality far above normal, not only for the long and assertive kick, but also for the ability to direct it. He occupies the defensive zone very well and works as the first point of construction.”

On Manchester City’s organisation, Wolves’ coach Barbosa said: “It’s a team that doesn’t play as much foot to foot as, for example, Barcelona in the times of Pep Guardiola did, but the principles are practically the same. I think the characteristics of the players is what led the Spaniard to adjust this game idea. When the ball arrives in his box, Ederson doesn’t immediately kick it, but rather tries (and manages) to go out to play. It’s a team that values ​​the possession, the one-twos, the combinations, and we have already seen games in which they enter the opponent’s box with the ball this way. It’s totally different from English football, which favours crosses to the box, and has given results.”

Finally, the Wolves coach had a say on Manchester City’s attacking system: “I think that this offensive power of Man City begins right in the very organisation of the team and in the philosophy of possession. It’s from there that their whole game unfolds. We clearly realise they have a squad filled with great players, and regardless of who plays the ideas and the principles are always the same. This was evident in the game we played for the English League Cup. They have a lot of defensive safety, they start building the offensive game from there and then, with the offensive capacity and the immense quality of their individuals, they create many problems.”

It may sound strange that a goalkeeper coach is taken by the newspaper as a Man City specialist, but Wolves still deserve some credit here. The Molineux side are the only club who stopped Pep Guardiola’s team from scoring this season, as they drew 0-0 before getting knocked out on penalties in the League Cup in October.