One more failed transfer for Wolverhampton’s list this summer. The club were now reportedly rejected by Willy Boly from Braga.

According to A Bola, the clubs had an agreement for the move, but the central defender didn’t accept to join a Championship side. 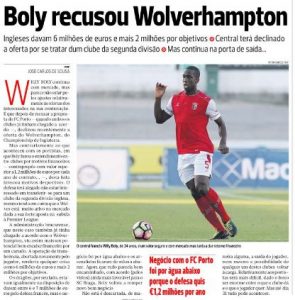 Wolverhampton would pay €6m plus €2m in bonuses for the transfer, which was considered a very good amount for Braga. The Portuguese side aren’t desperate to sell him, but he’s seen as a good market opportunity since he’d mean a good profit for the club.

Boly has also rejected a move to Porto earlier this window. The Dragons were going to pay between €6m and €7m for the signing, but he wanted yearly wages of €1.2m and the transfer ended up collapsing.

A Bola claims that the possibility of Wolves or Porto trying the signing again is not ruled out, but since the player’s reasons weren’t financial, we reckon it’s hard to imagine how the English club would convince him to play in a lower division.