One of the defensive revelations of this Serie A season, Gianluca Mancini has started attracting a lot of interest around Europe.

The Italy U21 international might only have 26 Serie A appearances under his belt, but he’s already been called up to the national team’s main squad by his namesake Roberto, even if he didn’t set foot on the pitch for the friendly against USA.

This information is given to us by Gazzetta dello Sport, who explain Wolves are one of three Premier League sides (Everton and Fulham being the other ones) to have made an ‘attempt’ for the 22-year-old. 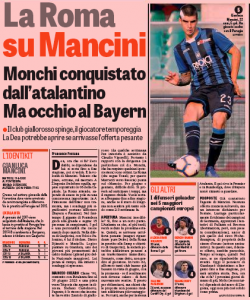 While all were ‘appreciated’ by the young defender, the Italian newspaper state the one from Nuno Espirito Santo’s side was ‘even more so’.

Each offered ‘plenty of’ money, but all Mancini has in mind for now is finishing the season with Atalanta, unwilling to leave them midway through the season.

After that, let the games begin! Although it’s worth pointing out clubs like Bayern Munich are also circling…