Thomas Lemar was expected to leave Atlético Madrid in the last window after managing only 112 minutes of action since football resumed in June.

On September 24th, Le10 Sport claimed Wolverhampton Wanderers had opened ‘concrete negotiations’ with the La Liga side for the 24-year-old.

FC Porto and Bayern Munich were also linked with the winger, but none of these clubs were successful in taking him away from Wanda Metropolitano.

Today’s edition of AS claims Bayern showed interest in the Frenchman and Porto wanted to take him on a loan deal.

With regards to Wolves, the newspaper adds ‘Wolverhampton was always there…’

The wideman failed to get a move away from Atlético because the proposals from Wolves, Porto and Bayern didn’t convince Los Rojiblancos. 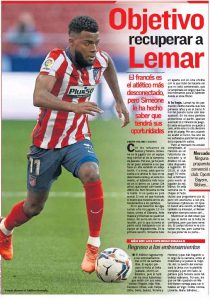 There’s no mention whether Wolves wanted Lemar on loan or a permanent transfer, and the report also doesn’t specify the details of the offer made by Nuno Espírito Santo’s side.

Lemar will be at the Spanish club at least until January and AS adds that Diego Simeone has let the player know ‘he will have opportunities’ at Atlético this season.

The former AS Monaco man has been restricted to 13 minutes of action this season.