Home Europe Player ‘preparing to make the leap’ to Wolves – Club ‘in the...
SHARE

Their unique relationship with Jorge Mendes means numerous Portuguese players have turned up at the club in recent years and that more will follow that path in the near future.

Indeed, it would be very, very strange were they not to sign at least one such player this summer as Nuno Espirito Santo looks to improve his squad and build on another impressive campaign.

And, according to A Bola, there could be not one but two more Portuguese stars rocking up at Molineux this summer.

The first of those is Sporting midfielder Palhinha. He’s been linked to Wolves for several months now and a report at the beginning of this month stated they were his ‘likely destination’.

A Bola repeat that statement today, stating that the player is ‘preparing to make the leap’ to England and join Wolves in a deal worth around €13m.

However, his arrival at the club is dependant on his compatriot Ruben Neves departing for ‘a bigger club’, at which point Palhinha would be signed to replace him. 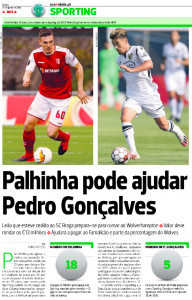 While that deal has stipulations and needs someone to move for Neves first, one for Braga striker Paulinho is less complicated.

Wolves do not need him to replace anyone – although that could change if someone comes calling for Raul Jimenez – and instead just want to reinforce their forward line.

Paulinho is a player they like, particularly after he scored 25 goals in 28 games last season, and A Bola say they were the first club to take a ‘serious interest’ in him.

They have felt for a while that they would have to go as high as €30m to secure his signature so were holding off but interest from elsewhere, namely Lazio, seems to have elicited a response from those in charge at Molineux. 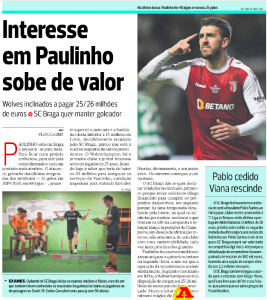 The Serie A side have seen a €15m bid rejected outright by Braga, but that has put Wolves ‘in the mood’ to offer €25-26m, the ‘magic number’ for the Portuguese side.

The striker, for his part, is in Braga ‘getting ready for everything’ and waiting to see if Wolves finally make their move and turn their interest into something serious.