Sporting Club de Portugal have made it clear to Wolverhampton Wanderers they want €40m for midfielder Matheus Nunes.

That’s according to A Bola, who say while the move to Molineux ‘is a given’ for teammate Joao Palhinha, the same cannot be said for Nunes.

They explain that, like Palhinha, Nunes is on Bruno Lage’s list of targets to reinforce Wolves this summer, but the 23-year-old’s asking price is at least €40m.

That’s a figure Wolves ‘can hardly reach’ at this moment in time, and the midfielder’s other suitors have not pushed forwards yet either.

Manchester City are another interested party, and while Fulham have been named as a potential buyer, they are only interested in Palhinha at this moment in time. 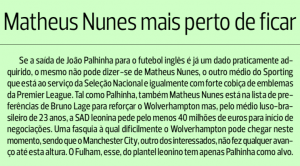 It means that Nunes is ‘closer to staying’ at the Portuguese club than his teammate for now, despite the fact he is being coveted by clubs in the Premier League.

Things can always change, of course, and perhaps Wolves will have more funds when the expected sale of Ruben Neves goes through.

At this point, though, Nunes is out of their price range, despite him being on Lage’s list of potential targets.