It seems there’s a new angle for the Patrick Cutrone saga on a daily basis, and Tuesday is no different.

After a flurry of claims involving Benevento, Bologna or even Parma, it’s now Torino’s turn to be thrown into the mix as potential suitors for the Wolverhampton Wanderers striker.

Those on top of the situation have been La Nazione, a local newspaper to the Florence region, and they are the ones giving us the update today.

According to them, Torino have ‘come back to the fore’ for the Wolverhampton loanee, currently at Fiorentina, and it’s explained the forward will ‘soon talk with his new agent’ (Federico Pastorello) about his future. 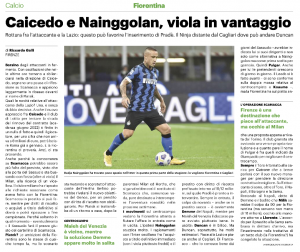 The newspaper state he will assess his options to ‘take the best contractual direction’, before adding Sampdoria and Napoli have also joined the fray, alongside the aforementioned Bologna.

It appears half of Italy are after the Wolves man, which isn’t surprising considering how reputable he was during his Milan days prior to his surprise move to Molineux.

That means a stay in his home country is almost a guarantee, but the big question going forward is where.