Every day, we get some sort of update regarding Franck Kessié, and normally it involves Wolverhampton Wanderers.

They remain the team everyone thinks are the most interested in the Milan player following their reported attempts to sign him late in the summer transfer window, but they might get some competition.

According to Corriere dello Sport, the Serie A side have already received ‘offers from the Premier League’, suggesting there’s more than one side interested in bringing the Ivory Coast international to England.

They make a point of reiterating Wolves’ ‘serious attempts’ in the summer, and explain the player is no longer ‘untouchable’ at the San Siro, which could see him sold for a ‘useful profit’ to help any transfers the club want to make the other way in January. 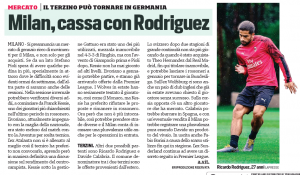 This comes a day after Gazzetta dello Sport claimed Wolverhampton were prepared to put an offer of over €20m on the table to acquire Kessié’s services in January.

Either way, there’s a very strong chance Nuno Espírito Santo’s side are one of the teams to have made an offer, or, if they aren’t, they are likely to make one soon if all the reports are to be believed.

However, it’s also worth keeping in mind the chat Wolves scout John Marshall had with TuttoMercatoWeb on Wednesday, explaining he didn’t think there would be a move for the player in January due to their current depth at the role.

‘Because of the costs’ – Club dropping out of race for Molineux star, Wolves an ‘expensive shop’

‘Because of the costs’ – Club dropping out of race for...

Newly promoted side have ‘good chances’ of beating Chelsea and Tottenham...