Manchester United triggered the option to extend Jesse Lingard’s contract by a further 12 months and his current deal now runs until 2022.

Ole Gunnar Solskjaer has used the 28-year-old only in cup competitions this season and hasn’t given him a chance to feature either in the league or the Champions League.

Earlier this week, we carried a report from Calciomercato, who explained the attacking midfielder was offered to Inter Milan this month. However, the Nerazzurri rejected the opportunity to sign him, just like AC Milan did last summer.

Two days ago, Sky Sports in England reported representatives of the Red Devils player are in talks to send Lingard on loan to OGC Nice. These claims have been relayed in the English press and also in France.

Nice-Matin have published an interview with the Ligue 1 side’s president, Jean-Pierre Rivère. The newspaper categorically asked about the recent reports linking Lingard to Nice.

Responding to the Lingard rumours, Rivère said: “We have seen a lot of names appear in the press without any merit. Our goal is to get our entire squad back together and we all aim to have a good second part of the season.

“No, that won’t be the case [expecting a big transfer in the winter market]. The context is totally inappropriate.” 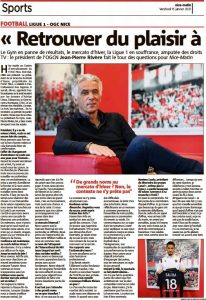 “We know that the winter transfer window is very special and difficult. We had the opportunity to bring in William Saliba and we are delighted.”

With Nice now joining Inter to turn down an opportunity to take the Manchester United player, Lingard and his representatives will have to look for a new club, if the forward wants to move in January.