Erling Haaland’s future beyond this season remains uncertain as Real Madrid, Manchester City and Barcelona continue to be named as the Borussia Dortmund star’s suitors.

Barca president Joan Laporta has hinted the Catalan club may not succeed with an approach for the 21-year-old due to the cost involved in the operation.

Sport on Monday state Laporta knows he will have to ‘reach an agreement with CVC, sell assets, put several players on the market’ to carry out the Norway international’s signing. In addition to this, he would also have to break the salary structure at the Camp Nou.

Another reason why Laporta is ‘right to stop this story by image’ is because Manchester City and Los Blancos are ‘better placed’ than Barcelona to acquire the frontman’s services. Sport issue a warning that ‘one should only get involved in wars they can really win’.

The newspaper further adds: ‘Right now, the club is not about to embark on auctions it can’t afford and wars it can’t win. Better to lower the soufflé now than a slap in the face in June. The past says that Barça is better off making Ballon d’Ors than buying them.’ 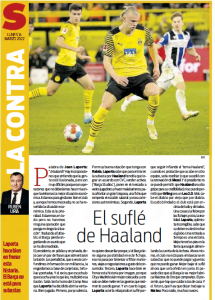 Over at AS, they continue to state City and the two La Liga sides are among the options that are on the table for Haaland and he has given ‘absolute priority’ to Real Madrid. The latter have made it clear to Mino Raiola that if his client were to leave BVB, they intend to sign him.

Although Haaland has said yes to Carlo Ancelotti’s side, he and his family are ‘living with some concerns these days’ because of Karim Benzema’s influence at the Bernabéu. There’s belief the 34-year-old still has a few more seasons under his belt.

Benzema could likely form a trident with Vinícius and Kylian Mbappé next season and this has been a cause of concern for the Norwegian and his family.

Claims made in England about Pep Guardiola’s side reaching an agreement with Haaland are relayed by AS. They then state that ‘with nothing signed and everything to decide, the situation around Haaland is hyperdynamic’.

A move to PSG is not a priority because Ligue 1 does not seduces the Norwegian, but that isn’t the case with the Premier League and La Liga where City and Real Madrid are his main suitors. 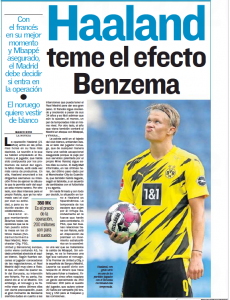 The situation around Benzema is causing a dilemma for Halaand to join Real Madird. This, and Laporta’s hints give Manchester City an edge in the transfer race.