Antoine Griezmann has had a good year so far with Atletico Madrid and France.

The 27-year-old achieved success in the Europa League and the UEFA Super Cup with the Spanish capital club and won the World Cup with Les Bleus as Didier Deschamps’ side overcame Uruguay, Argentina, Belgium and Croatia to win the FIFA tournament in Russia.

He sat down and gave a lengthy interview to French newspaper L’Equipe this week, in which he spoke in detail about various topics.

It is no surprise that the former Real Sociedad star was asked about Manchester United’s Paul Pogba and while talking about the midfielder, the La Liga forward spoke about N’Golo Kante’s abilities to recover the ball.

The reporter then asked Griezmann whether he was impressed by the Chelsea star and the attacker explained how good the former Leicester City man was for France, both during the games and even in training sessions.

“Yes [I was impressed]! One could see [it in] the training sessions. Those who are in his team in small-sided games, they win all the time. Suddenly, everyone wants to be with him…” Griezmann said about Kante. 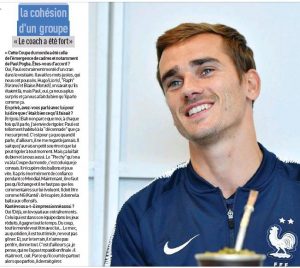 “The guy is quiet and shy every day, does not want to interfere. And, on the field, he doesn’t like to lose and gives you everything. This is it.”

Antoine Griezmann is yet another member of the N’Golo Kante fan club.

Club have ‘worked extensively’ to convince Arsenal player to sign –...