Home Championship Willy Boly at Porto ahead of Wolves transfer, Ruben Neves not at...
SHARE

In the shadow of the Ruben Neves to Wolves mega-transfer-story, Willy Boly’s loan from Porto to the same club is a much quieter affair.

Covered in Portugal on Sunday, there’s a slight update on the situation on Monday from Record. The Portuguese newspaper say that Boly will be at Porto’s first day of preseason training on Monday, as his loan move to Wolves isn’t finalised yet.

The player’s agent Meisa N’Diaye is quoted as saying: “He’s a Porto player and will be there like everyone else.”

N’Diaye had nothing to add about the Wolves loan, but Record once again say Boly ‘will be loaned to Wolves’ but the final details of the transfer aren’t yet completed. Until they are, and there seems no rush, Boly will train with Porto and fulfil all his obligations to the club.

It’s fair to say the Boly transfer isn’t generating a great deal of excitement for anyone involved. 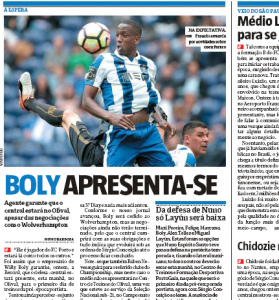 Ruben Neves, however, is generating a great deal of excitement, and Record say the midfielder won’t be at Porto training today. That’s not because he’s flying to Wolves, but because he’s not due there, given longer holidays after playing for Portugal’s U21s.

Record say Neves is likely to travel to England to complete his €18m move to Wolves, in a move which is being treated as done.

Although they don’t say if that travelling will happen today.