Matteo Guendouzi continues to be very much himself since being edged out of Arsenal for the second time in two seasons.

The French midfielder is again annoying teammates, the oppositions, and many people watching, but L’Equipe report he’s perhaps found a place where that is not only acceptable but positively welcomed.

Mikel Arteta grew frustrated with Guendouzi, hence him being sent on two loans, and wasn’t prepared to put up with the player’s attitude despite the obvious talent he has.

That was perhaps the best decision, especially given Arteta was looking to build the right dynamics within his Arsenal squad.

At Marseille, where Guendouzi has landed now, and where he may be for the forseeable future, that attitude and arrogance is serving him well.

The club’s fans want players with something about them, with a bit of attitude and disdain for the opposition.

There’s a reasonable chance that at some point this season it all goes wrong for the Arsenal outcast. 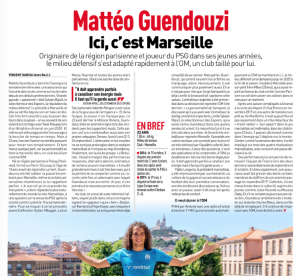 L’Equipe have an article on how well Guendouzi’s way is fitting in at Marseille, however, there’s a warning.

An unnamed opponent is quoted as saying: “He insults freely but he knows very well with whom he allows himself to behave like that. One day he’ll pick on the wrong person and it will end very badly.”