There were reports of deportation orders, and representatives of local Brazilian authorities entered the stadium, backed by police, to remove the individuals involved.

That included Tottenham’s Giovani Lo Celso and Cristian Romero, and there’s now uncertainty over what happens with the Spurs pair.

Ole, Argentina’s premier sports newspaper, reports that Emiliano Martinez and Emiliano Buendia, both of Aston Villa, are travelling back to Europe today and won’t be available for their country’s next match, which is against Bolivia on Thursday.

What happens with the Tottenham players isn’t as sure, with it explained that Lo Celso is pressuring his club to allow him to stay and be available for that match. The situation with Romero is thought to be similar. 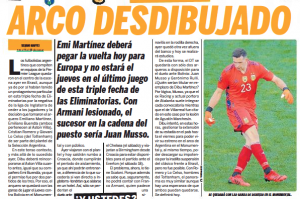 Covering the situation, Ole say ‘it will be defined today’, and it’s clear Tottenham will hope their players go the same route as the Aston Villa pair, and arrive back in Europe on Monday.

Whatever happens on that front, it’s thought the players will travel to Croatia, and train there, to avoid hotel quarantine in England.

‘Everything possible is being done’ – FA ‘moving heaven and earth’...