Norwich City’s hopes of keeping Ondrej Duda beyond this summer have been dealt a blow, with Hertha Berlin planning on keeping him long-term.

Duda joined Norwich on loan in the January transfer window, as manager Daniel Farke looked to add creativity to his relegation-threatened side.

The midfielder arrived having found his chances of regular game time at Hertha Berlin limited following the arrival of Jürgen Klinsmann as manager.

He’s been a regular for the Canaries since making the switch, racking up eight appearances in all competition since his arrival.

They may have been hoping to turn his move into a permanent one in the summer, but those prospects have now been dealt a blow.

According to Kicker, Norwich do not have an option to buy at the end of his loan, so Hertha are planning to take him back to the club as Klinsmann has long since departed.

In fact, sporting director Michael Preetz has confirmed as much when asked about the on-loan midfielder. 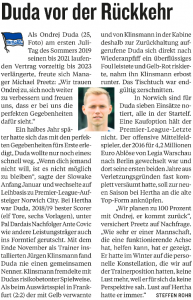 “We are planning 100 per cent with Ondrej, he will come back”, he told the newspaper.

“He has shown how much he can help a team that has a functioning axle.

“In winter, he was tired of the personal constellation we had in the coaching position because he saw no prospects for himself. He always wanted Hertha.”