Tim Krul was well placed to play a part for the Netherlands at Euro 2020, and is one of the few players who may be disadvantaged by the tournament being delayed for a year.

A good season with Norwich City could ultimately lead to relegation, whether the Premier League is resumed or not, and that throws some doubt around the player’s prospects for Euro 2021.

Not that any of this is at the forefront of the goalkeeper’s mind. De Telegraaf have managed to get a few words with the stopper, and whilst they point out that Krul was initially reluctant to speak, given the current situation with Covid-19, he’s made sure to make clear that people helping those in need are in his thoughts.

The Dutch newspaper quote Krul as saying: “Who am I to complain when the whole world is on fire?

“Attention should be paid to the nursing staff who walk straight into the fire for fourteen consecutive hours to save human lives. I have unlimited admiration for that.”

But, still, having been on the verge of a return to the Netherlands team, there is a personal aspect which Krul was pressed to speak about: “The conversation I had with national team coach Koeman after Norwich City-Liverpool and my preselection for the international matches at the end of March against the United States and Spain, which are 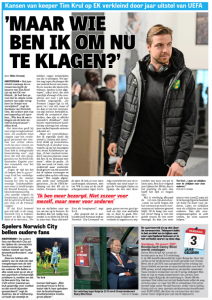 not going ahead, made me feel good and is a motivation to continue. Maybe during the international matches in August and September I will get a chance to show myself. If I am there during the European Championship next year, it will be wonderful. If not, it wasn’t to be.”

Further demonstrating he’s not concentrating on his own woes right now, the Norwich player explained he’s already had his international career highlight, when he came on to be a hero in a penalty shootout against Costa Rica at the 2014 World Cup.