While a very good Premier League player, Tottenham’s Victor Wanyama isn’t someone you would qualify as one of the biggest stars in the league, yet he has his fair share of admirers abroad, especially in Belgium.

Last week, we covered an interview with KAA Gent centre-back Samuel Gigot, who wanted to follow in the Spurs midfielder’s footsteps, dreaming of England.

Well, following the Belgian club’s victory over Mauricio Pochettino’s men in the Europa League, another player has come out and revealed he uses the Kenyan star as his role model. 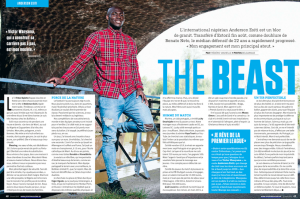 Anderson Esiti, a 22-year-old defensive midfielder who joined Gent from Estoril last summer, gave an interview to Sport/Foot, and revealed he shared the same dream as his teammate Samuel Gigot.

He explained: “Following our qualification in the Europa League against Tottenham, I thought it was only a question of time before I reached the level of someone like Victor Wanyama. Now I dream of England. Wanyama is a model, he built his career bit by bit. I was unknown at my arrival in Gent, but now the whole of Europe knows me.”

Playing both legs against Tottenham, the midfielder has been a regular for the Belgian side this season, making 35 appearances in all competitions, picking up one red card, following two yellows in the first leg of the Europa League last 16 against KRC Genk.

Whether he has done enough to earn a move to England, however, remains to be seen.