With their season opener now out of the way, beating Lecce 4-0 at home, Inter can now return to focusing on bringing Alexis Sánchez from Manchester United to San Siro.

When we last left this, things weren’t going too well, as Calciomercato explained the talks between the two sides had failed to find the desired outcome, but Tuesday’s edition of Gazzetta dello Sport is a bit more optimistic.

They claim only details are holding up the transfer from happening, and it’s once again the wages that are at the centre of the issue.

However, the positivity comes after ‘direct’ talks between Manchester United and Sánchez’s agent, Fernando Felicevich.

It’s stated Anthony Martial’s injury doesn’t change anything, with the Chile international still allowed to leave Old Trafford, and it appears United are being ‘less rigid’ regarding the salary. 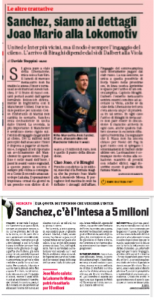 The ball is now ‘in Inter’s hands’, after an agreement was reached between the two clubs for a loan with a view to buy at €15m.

Over at Corriere dello Sport, things are even more upbeat, as they reckon Sánchez’s exit could be sealed today (Tuesday), with the medical and the contract signing to follow if the ‘white smoke’ is given soon.

To get there, the newspaper echo Gazzetta, explaining it’s up to Inter to agree to paying €5m of the player’s wages, with the remaining €7m being paid by United.

If they do, it could be the club ask for a small discount on the fee they would have to pay at the end of the loan, meaning a tad less than €15m.