The outlet has been dragging this story on for months now, and with the Old Lady facing Manchester United in the Champions League, things only got more intense.

With the Red Devils almost losing in Turin this week, the newspaper was probably preparing some story about Pogba’s feelings for his former club. And even though Manchester United managed a late comeback, the article is still very close to that.

Tuttosport claims that Pogba has felt the contact with Juve fans, and should soon show his feelings to his former teammates, with whom he still has frequent contact on Whatsapp.

The Whatsapp messages are seen as a hint towards a potential transfer.

Even the fact that Pogba has spent a few extra hours in Turin for a drug test is seen by the newspaper as some extra contact with the city and fans. And his return to Manchester one hour later to the squad is the reason for a joke. 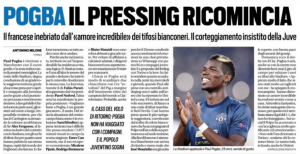 “In the end, the Frenchman landed in Manchester an hour late, and thank goodness that José Mourinho was already under the covers.”

Speaking to the Italian media, Juve officials have shown their love for Paul Pogba, even though they never mentioned the chance of a comeback. Still, Tuttosport insists in taking it as a clues that the ‘octopus’ could return to Turin from Manchester United soon.