Unfortunately for Lazio, West Ham closing in on Andriy Yarmolenko is bad news for the Felipe Anderson deal.

This is what Gazzetta dello Sport, Il Tempo and Il Messaggero all agree on on Monday, explaining the Ukrainian’s impending arrival at London Stadium for around €20m will do anything but help the negotiations for the Brazilian.

Claudio Lotito’s demands of €45m for the 25-year-old were the cause of numerous meetings between the Hammers and the Serie A side, with neither deciding to budge from their respective stubborn stances.

Then came the ridiculous stories about a joint package for Anderson and Jordan Lukaku, with the latest report from Il Messaggero claiming Lazio were asking for €70m for the pair. 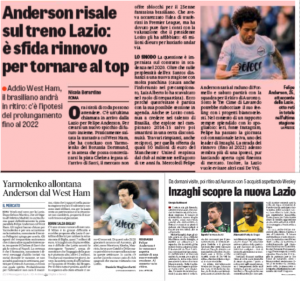 All of this combined with the fact Manuel Pellegrini’s preseason is about to start appears to have led to West Ham looking elsewhere, even if talks between the two clubs for the Brazilian are yet to officially collapse.

It seems highly unlikely the Hammers will sign both Yarmolenko and Felipe Anderson, but who knows?

Maybe the Chilean manager believes his new team are so devoid of attacking talent, he’s asked for two new wingers.