Alaves’ Guillermo Maripán has been on West Ham United’s radar for quite some time now.

Two days ago, Mundo Deportivo reported the Hammers had already made the first offer in excess of €11m for the defender.

Friday’s edition of Marca now claim the 25-year-old is one of the ‘priority objectives’ of Manuel Pellegrini in the summer transfer window.

He is currently on international duty with Chile as they are preparing for the 2019 Copa America in Brazil.

The English club’s idea is to seal the deal for the player before the start of the South American continental tournament, which is set to kickoff on June 14th. 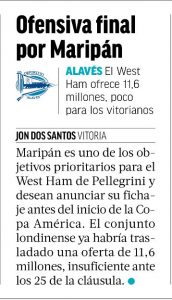 It is further explained the Premier League side have made an offer of €11.6m for the Chile international, but, the offer from West Ham was deemed ‘insufficient’ for Alaves, which is less than half of his €25m buyout clause.

Two days ago, Maripán expressed his desire to play in the Premier League, while he also made it clear that a decision on his future will be taken after the Copa America.

That means that even if the two clubs manage to agree on a transfer fee in the near future, it is unlikely any deal would take place before the start of the Copa America.