Home Europe West Ham youngster talks about injury struggle – ‘One of the most...
SHARE

Signed from Benfica back in January 2019, the youngster still hasn’t made his debut for the Hammers, having only made appearances for the club’s U23 squad.

Something that was an extra obstacle in his time at the London side was the injury he picked up early this season, which left him out for over four months.

Dju still managed to score in his comeback against Sunderland, and he says that meant a lot to him.

“It was one of the most difficult moments I had. I did a good pre-season, I was very confident and that happened,” Mesaque Dju told Record.

“Morale was down, but I’m lucky to have positive-thinking people at my side who helped me fight. I worked hard and knew it wasn’t going to be easy when I got back. I’m doing the same now.

“It was a unique feeling! Few know what I went through. When I scored, the first thing that came to my mind is that everything comes in God’s time. I immediately thought of my family, which is far away, in France.” 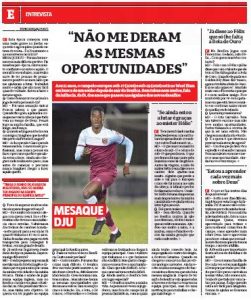 Quizzed if he’s ever felt he’d be playing in the Premier League one day, Dju said: “I don’t think so! Of course, we have dreams. Mine was to be a professional, but I never thought of doing the route I did and that I’m still doing. I haven’t reached where I really want to go, but before I started the journey I never imagined getting to do what I did.”

Mesaque Dju has also talked about the struggles when starting his career, in a time when Benfica starlet Florentino Luís was already his teammate.

“Florentino and I didn’t have a five-star childhood. We came back from train training at midnight to go to school at 7am when we were 10 or 11 years old. I had to take three transports without paying to get to train, it was a big challenge.”

Asked if he expected something different from England, Dju said: “Since I was little, people already told me about English football and said it was for me because of my speed and my technique. I had the dream of playing for an English team, but at Benfica the dream was to step on Estádio da Luz. I didn’t think to leave so soon, but I had this goal. I just wanted to have played in Benfica’s first team before.”

Finally, Dju also talked about the struggle of being on his own in England during the Coronavirus break.

“These are difficult days, also because of being away from the family. I turned 21, and we didn’t celebrate it close to my family, it wasn’t easy. Not for my mother either. I’m with Domingos Quina, we have taken the opportunity to train and improve things outside the field, like learning more about God. That and taking the opportunity to do things that we normally say we don’t have time for, like reading the Bible.

“I grew up in a family of faith, and I’m increasingly connected to God because I have realised that it’s Him who controls our lives, it isn’t us. I have faith that all this will end. It isn’t being easy for anyone. We have to help by staying at home.”