West Ham United have Adnan Januzaj ‘on their agenda’, with the forward set to make a decision about his future later this month.

That’s according to Diario de Sevilla, who say the Hammers are one of several sides to have put forward proposals to the Belgian as he gears up to leave Real Sociedad.

Januzaj is coming to the end of his contract with La Real and has decided to depart for a new adventure somewhere else rather than extend his stay with the Spanish side.

Real Betis are one of the sides interested in him and are keeping a ‘close eye’ on the situation, but they face competition from other clubs, and West Ham are one of them.

Diario say he Januzaj is ‘on the agenda’ at the London Stadium, and his ‘main backer’ is David Moyes, who worked with him during their respective spells at Manchester United. 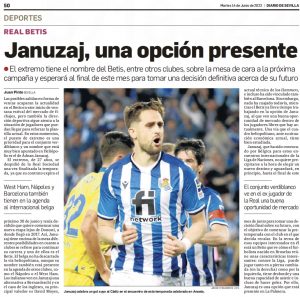 Nothing has come to fruition as yet, and Januzaj, who is currently on international duty with Belgium, is not rushing into making a decision.

Whether a return to the Premier League with West Ham would appeal isn’t mentioned, but they’re keen and battling Betis and Napoli for his signature nonetheless.