Portuguese newspaper Record features a story today in which they claim Sporting winger Gonzalo Plata is ‘opening the door’ for an exit from the club.

And when listing the potential destinations for the 20-year-old, there’s West Ham United, who reportedly continue to have an interest in his signing.

Record claims that the Hammers were already willing to sign him in the summer. This time, they’d be keen on a loan with an option to buy.

The outlet also names Napoi and Newcastle United in the race, but taking both claims from the international media, while West Ham’s chase comes from their own sources. 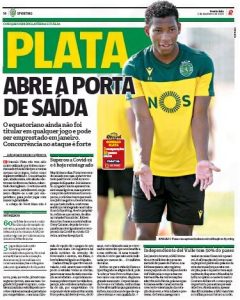 Gonzalo Plata wants to leave Sporting due to the little playing time he’s been getting, as he only has 64 minutes for the Lions this season.

Record says the Lisbon side won’t let the winger leave for less than €20m.

The club only own 50% of his rights, as the other half belongs to his former club Independiente Del Valle. Both sides are currently in negotiations so Sporting can get a bigger share of a potential sale.

Chelsea have ‘asked for information’ on player ‘in recent days’ –...