In the final week of December, reports coming out of Spain talked about West Ham United’s interest in Athletic Club Bilbao’s Unai Núñez.

It was explained the Hammers ‘want’ the 23-year-old and had informed the Basque club about their desire to sign him in January.

The centre-back’s current deal with the La Liga side expires in 2023 and has a €30m release clause in his contract.

Bilbao president Aitor Elizegi and manager Gaizka Garitano wanted the defender to continue at the club.

Friday’s edition of AS claims David Moyes’ side were willing to pay Núñez’s buyout clause to secure his services in the winter market. However, the transfer will not go through because the player wants to stay at Bilbao. 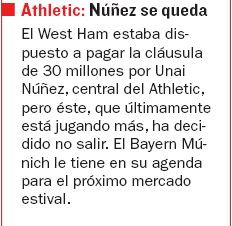 Núñez saw his playing time limited at the start of the season, but the situation has improved of late as he’s featuring regularly for the Spanish side. Therefore, he’s decide to continue with his current employer.

AS adds Bayern Munich have the Bilbao defender on their agenda for the summer.

Granovskaia can still help Chelsea get transfer over the line –...