Real Betis forward Antonio Sanabria has emerged as a transfer target for clubs in England and France, including West Ham.

The 22-year-old arrived at Benito Villamarín from AS Roma and the Spanish club paid €7.5m to land him two years ago.

Spanish newspaper AS claim West Ham United are interested in signing Sanabria and ‘want to secure the services’ of the player.

He’s seen his first team opportunities being limited under Quique Setién, playing 847 minutes in the league and scoring eight goals in the process across 15 matches. 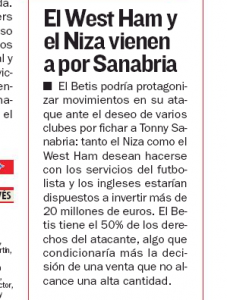 Manuel Pellegrini’s side are willing to invest in excess of €20m to sign the Paraguayan international, but the Premier League outfit will face competition from OGC Nice as the Ligue 1 side are keen on signing the attacker.

Roma have a buy back option and can re-sign Sanabria for €14.5m.

If they decide against taking the option and Betis end up selling him, the Serie A club will earn 50% of the transfer fee and the remaining half will go to the Spanish club.