They claim that with Pablo Zabaleta not staying at the London side, the 23-year-old becomes ‘one of the first options’ to replace him.

It’s recalled that West Ham had already tried to sign Montiel on a loan deal back in January, and they should be returning for him in the summer, depending on one condition.

With the Hammers currently one position above the relegation zone, they must first see what will happen between now and the end of the season, and only then make their moves in the transfer market. 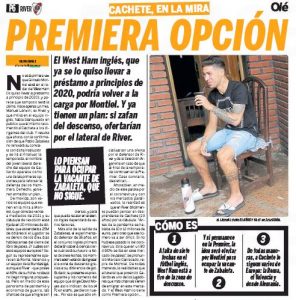 So this bid would only be made in case West Ham stay in the Premier League, as they would give up in case of relegation.

Montiel is protected by a release clause of US$20m, which rises to US$25m in the final ten days of the transfer window. But given the Coronavirus crisis, River Plate are expected to accept a lot less.

Olé writes that Montiel has also attracted interest from Valencia, AS Roma and an unnamed German side. No offers have arrived in Buenos Aires so far.

Southampton ‘willing to pay’ get transfer done – After first Saints...