As you may know, Christian Eriksen isn’t have the best of times at Inter these days.

The Danish midfielder has struggled to fit in Antonio Conte’s plans since moving to the Serie A side last January, and there’s already a lot of talk about him finding himself a new club a year after his last transfer.

His wages and poor form have made him a difficult person to move on, however, opening the doors for the likes of West Ham to give it a go.

Normally linked to bigger clubs, such as Manchester United and even Paris Saint-Germain, Eriksen has also become an ambitious target for David Moyes’ side, according to various reports, which Corriere dello Sport look at on Wednesday.

The Italian newspaper explain the Hammers have made ‘a few enquiries’ about the Inter playmaker, ‘but only for a loan’.

That, however, isn’t good enough, with a temporary deal ‘not a viable route’, meaning that if West Ham want any chance of getting Eriksen, they will have to change the formula of their approach. 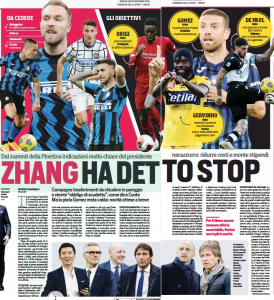 It’s not explicitly stated, but the alternatives that are likely to be accepted would probably be a loan with a mandatory purchase option or a straight up transfer.

We’d normally say it might be a bit much for West Ham to aim that high, but the owners have always been ambitious when it comes to big name signings, and with results somewhat going their way in the Premier League these days, it could be they make that big push to get their man to try in hope of him helping them secure a comfortable top half finish.