West Ham United signed Roberto Jiménez on a free transfer before the start of the season and offered him a two-year contract.

The goalkeeper has made eight appearances in the Premier League this season and the 33-year-old hasn’t featured for the Hammers since their 2-1 defeat to Crystal Palace on Boxing Day. He is now linked with a move away from the London club.

Monday’s edition of Mundo Deportivo talks about Alavés’ interest in bringing the custodian back to Spain in the winter market.

The La Liga side have already made new additions to their squad this month and this includes the transfer of Víctor Camarasa. The report adds ‘next to arrive’ is Roberto. 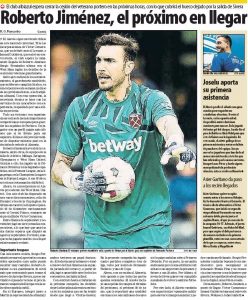 Their idea is to close the deal for the temporary transfer in the next few hours.